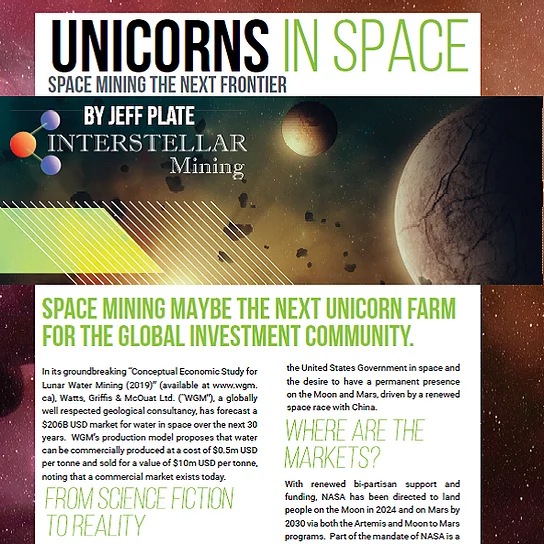 SPACE MINING THE NEXT FRONTIER

SPACE MINING MAYBE THE NEXT UNICORN FARM FOR THE GLOBAL INVESTMENT COMMUNITY.

In its groundbreaking “Conceptual Economic Study for Lunar Water Mining (2019)” (available at www.wgm.ca), Watts, Griffis & McOuat Ltd. (“WGM”), a globally well respected geological consultancy, has forecast a $206B USD market for water in space over the next 30 years. WGM’s production model proposes that water can be commercially produced at a cost of $0.5m USD per tonne and sold for a value of $10m USD per tonne, noting that a commercial market exists today.

FROM SCIENCE FICTION TO REALITY

For decades there has been talk of colonizing space with little to show for it as there was no overreaching commercial reason to do so. In the last few years, this paradigm has changed due to three major factors. First, the development of commercial launch capabilities at the fraction of the cost of government agencies. Second, development of reusable spacecraft and standardization of equipment improving reliability and reducing costs. Finally, the renewed engagement of the United States Government in  pace and the desire to have a permanent presence on the Moon and Mars, driven by a renewed space race with China.

WHERE ARE THE MARKETS?

With renewed bi-partisan support and funding, NASA has been directed to land people on the Moon in 2024 and on Mars by 2030 via both the Artemis and Moon to Mars programs. Part of the mandate of NASA is a requirement to resupply via lunar resources; this is known as in-situ resource utilization (“ISRU”) or space mining. The first target is known water resources on the lunar poles for use as propellant, life support and coolant. NASA itself is expected to be an initial client; however, to support its mission the Commercial Lunar Payload Services (“CLPS”) program has signed contracts with nine commercial companies to deliver cargo to the lunar surface. They are all looking for resupply on the Moon as well. Finally, there are a large number of commercial and military satellites in low Earth orbit whose operators have a keen commercial and military interest in orbital thruster propellant refueling which could be supplied from lunar derived sources rather than terrestrial ones. For more information on orbital refueling look at OrbitFab (www.orbitfab.space) the leading company looking to put a gas station in orbit.

WHY WATER AND NOT METALS

WGM and NASA has concluded that water will be the first exploitable resource in space because it is the easiest to access, has the most  potential applications and is the first commodity in which commercial contracts to acquire are available. Further, other volatiles such as methane, ethylene, and carbon dioxide will also be exploitable as feedstock for 3D printer manufacturing, construction materials and inputs for other processes such as space agriculture. Metals will eventually be exploited for local use; however, they will not be cost competitive in terrestrial markets and development of lunar infrastructure will be required before substantive metal mining will occur.

MINING IN SPACE IS VERY DIFFERENT FROM EARTH

All mining in space will be conducted robotically via autonomous or semi-autonomous robots with oversight and control from Earth based operators as it is too difficult, costly and dangerous to use humans. Low gravity, lack of atmosphere, high thermal flux, dust and solar radiation require specialized equipment and operations. Also, due to the Outer Space Treaty (1967), no country can claim sovereignty or jurisdiction in space. This means no taxation, permitting, environmental study or community engagement required to mine; just show up and dig. On the flip side, there are limited to no property rights, no policing or enforcement of contract or property rights in space, only enforcement of contracts in Earth based jurisdictions where they are made.

As with any new market, the first movers gain a tremendous commercial advantage over later arriving rivals. WGM compares space mining to the early days of the internet when no one knew what it was or how big it would become. If humanity continues to expand and permanently colonizes space,
it will need resources, not just water, for everything. It makes no economic sense to bring it all from Earth. There is a narrow window
of opportunity for enterprising companies to supply this market, while making extraordinary profits while operating in a tax and regulation free environment.

The future is now for space mining!